Franco Nero: 'As you get older, you want a quiet woman - not one who yells' 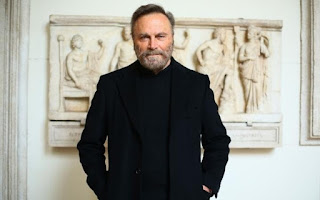 The Telegraph
By Victoria Lambert
March 9, 2017

He may have a reputation as one of cinema’s original monosyllabic tough guys, playing Django in Sergio Corbucci’s 1966 iconic Spaghetti Western of the same name, but today actor Franco Nero couldn’t be more warm and charming.

Dressed in a white towelling dressing gown, longish hair slung back over his shoulders, Nero, 74, is sipping a coffee between takes at a smart St Albans hotel. It’s a setting vastly more in keeping with his role in new British movie Time of Their Lives as the love interest Alberto; all rich and raffish artist rather than grizzled gunslinger.

In the film, Nero is torn between two women: faded glamourpuss Helen, played by Joan Collins, and Pauline Collins as dowdy Priscilla. Does he think men change in their attitude towards women as they age?

“Well it depends,” he says thoughtfully. “Of course, men appreciate beauty still. But as you get older you like calmer women. Not the ones who are a pain in the ass.”

He continues: “At a certain point you want a quiet life; a gentle way. Friends of mine – they have women who yell. One uses ear plugs. He puts them in” - Nero mimes reaching to his ears– “and he doesn’t hear a thing. He pretends nothing is happening. A quiet woman as you get older is nice.”

But, hang on, Nero is married to his long-time love, the firebrand actor Vanessa Redgrave – she of political rallies and matriarch of the extended Redgrave-Richardson acting dynasty. Quiet? 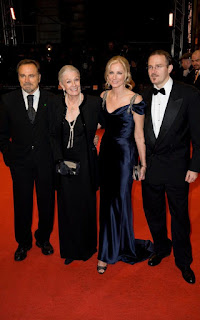 With wife Vanessa and Joely Richardson at the Baftas.

Nero and Redgrave’s love story is the stuff of silver screen folklore. The pair met on the set of Camelot in 1966, when he played Sir Lancelot to her Guenevere. He recalled some years later: “I see this woman with blue jeans with holes, no makeup, glasses. I asked the director, ‘Are you sure you made the right choice?’”

But when Redgrave invited him to dinner, Nero, then aged 24, could not resist meeting her and found his mind was quite changed. “A beautiful lady opened the door, and I told her I was invited by Miss Vanessa Redgrave. And this beautiful lady said, ‘I am she’.”

Vanessa was mother to two young girls Natasha, then three, and Joely, one, by director Tony Richardson, but the couple began a relationship that only ended after the birth of their son Carlo in 1969.

In the Nineties, after many years apart and other liaisons on both sides, they gradually rekindled their romance, and pledged their love by marrying on the last day of 2006 - 50 years after they first met. The couple now split their time between his farm near Rome, and her London home.

“We have an incredible relationship,” says Nero. “We talk every day, discuss the family, even when we are doing different things. “And then we get the whole family together in Italy. It is a great and large family.”

Their blended clan includes Carlo, a screenwriter, his wife and child, plus Joely, now 51, and her daughter Daisy Bevan, 24, who also acts. Then there is Micheál, 21, and Daniel Neesom, 20 – the sons of Natasha, who died in a tragic skiing accident in 2009 aged just 45.

When Natasha had married fellow actor Liam Neeson in 1994, it was Nero who walked the bride down the aisle, and he says now, “I consider her sons my grandchildren.”

The extended family all enjoy the Roman farm, where they work in the fields and harvest pears, lemons, prunes and pomegranates. If it seems a long way from the high octane buzz of the film set, it’s even further from Nero’s childhood as the son of a Carabinieri police officer in Parma.

“I love the life of farming and fishing, cutting back to get more olives,” he says. “But we also have a swimming pool, a tennis court, we play bocce [an Italian game similar to boules], we play cards.  “I taught Vanessa to play briscola” – a card game. “She has to tell me what she has in her hand, making signs very quickly with her mouth.” He mimes their secret code with amusement.

Redgrave’s daughter Joely also appears in Time of Their Lives. “It was so good to spend four or five days with her. We had lunch and dinner together and she bought me two very nice blue shirts for me.”

Nero’s character in the film, Alberto, is a reclusive millionaire widower, and sharp eyes will spot that the framed photographs dotted around his villa are, in fact, of Nero with real celebrities over the years. He has met almost everyone, it seems, including Yugoslav statesman Marshal Tito who invited a young Nero to the country to help kick-start a film industry there. 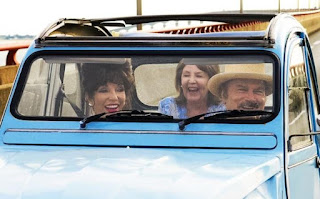 The Time of their Lives

He has known Joan Collins since the Sixties too, first meeting her when he was filming Camelot. “She was married to Anthony Newley. She was so nice. We have been in contact for many years.”

Nero himself has had the good fortune to work with many fine directors over the years, including John Huston (The Bible: In The Beginning…), Guy Hamilton (Force 10 From Navarone) and more recently Quentin Tarantino, making a cameo in Django Unchained.

Is there anyone he still wants to work with? “I would like to do another movie with Tarantino. I like him. He’s a genius. And Oliver Stone – I know him well. And Alejandro Iñárritu who directed Birdman.”

What sort of films interest him?  “I hate movies with special effects,” he says decisively. “Sincerely, I can’t stand them. Now it is all computer special effects, but I like the stories of human beings and relationships. That is cinema for me.”

Currently, Nero is working on the true story of a blind man from Turin, who was able to draw an accurate face from listening to a person’s voice and become a “hostage to TV – the sort of talent show circus. I want to show how television takes advantage of the misfortune of people to draw an audience.”

He is also pessimistic about the state of Italian cinema. “We were the first; now we are the worst. The world used to learn from Italian cinema and directors, but now we only have a few. People used to go to the movies but television has ruined everything.”

Would an Italian audience even watch a movie like Time of Their Lives which has an older cast?  “No, they wouldn’t accept old people. They just want cheap comedies.

“It’s not really a comedy – more a road movie and a little bit sad and bitter. But we hope we will make you laugh and maybe shed some tears, too.”