The shady Frazette Frank wants to take possession of livestock belonging to rancher Armstrong, even if it means getting his hands wet with blood. After murdering the rightful owner, Frazette is shifting the blame on the murder of Armstrong’s cowboys, who end up hounded by the sheriff of Abilene. In their flight, the intrepid Duke herdsmen, Barranco, Clay and Littleboy will face not only the outlaws led by Frazette, which are driving the stolen herd into Mexico, but also the Comanches who are making raids along the border ... An epic story written and illustrated by two "big names" of westerns: Gino D'Antonio and Renzo Calegari. 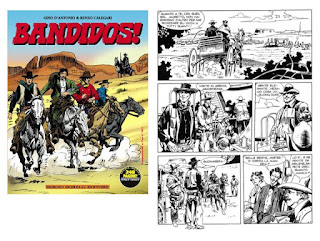 Gino D'Antonio (Milan, March 16, 1927), was one of the greatest authors of Italian comics and among the few that can boast a complete education, skilled both in writing as in the drawing. He began his career as a cartoonist in 1947, with an adventurous series of the African setting, written and drawn by himself: ?? ?? Jess Dakota. Between 1948 and 1949 Gino D'Antonio worked at ?? The Victorious ?? and then, from 1952 to 1954, to Pecos Bill ?? ?? Guido Martina and Raffaele Paparella, for the publishing house Mondadori. The return to ?? The Victorious ?? He sees D'Antonio in designer clothes, and undertook to make the Arthurian History, on texts by Mario Leone. The meeting with Rinaldo D'Ami dates back to 1955 and opens the doors to D'Antonio of the cross-Channel market, where public for the publishing house Fleetway stories for military background, then resumed in our country by Dardo. Fleetway to the war adventures, the Milanese author alongside sporadic collaborations with the magazine ?? ?? Audace, for which he made de stories ?? The Three Bill ?? El Kid ?? and ??. The British period of D'Antonio lasts more than ten years, ending in 1966 with the reduction of some comic classics of literature as ?? ?? The two cities of Charles Dickens, ?? ?? Twenty Thousand Leagues Under the Seas, the Jules Verne and ?? ?? Moby Dick, by Herman Melville, on behalf of the magazine ?? Tell Me Why ??. 1967 is the year when Gino D'Antonio gives most important work life (and impressive) of his career and one of the most interesting of all the Italian comics scene: the ?? ?? History of the West, published by Sergio Bonelli (then Editorial Cepim), or the record of the Frontier days returned through the point of view of a family of pioneers arrived from Ireland, the MacDonald, whose family stories are interwoven with the great historical events of the nineteenth century American. In this work, D'Antonio is backed ?? ??, to do the display, by talented professionals like Renzo Calegari, Sergio Tarquinio and Renato Polese. In 1970 he started a collaboration with The Newspaper ?? ??, tested that starts to carry out the various characters, as Susanna ?? ??, ?? Jim Lacy ??, ?? The soldier Cascella ?? and, in tandem with Ferdinando Tacconi, a series devoted to the Second World War, entitled Men ?? Basterds ??, later published by Editions L'Isola found. Even for the publisher Bonelli, prepares a project atypical western, which often borders on the register of comedy: ?? Bella & Bronco ??. He works as a writer and cartoonist in various registers of the series A Man an Adventure and, even with Tacconi, it gives life to the series ?? the ?? Mac stranger hosted on the Orient Express ?? ?? pages. In the late '80s and for all 90 continues the collaboration with Sergio Bonelli Editore, writing numerous stories and scripts for Nick Raider ?? ?? in addition to the fourteenth adventure ?? ?? Julia. In 2006, in addition to be insigito with the Grand Guinigi as Master of comics by the jury of Lucca Comics & Games, complete "Bandidos" a thick volume, designed by Calegari, due out on newsstands in 2007 and dramatized adventure, with starring Tex for Albo Gigante Filippucci that Lucio is finishing drawing. Disappears in Milan December 24, 2006.