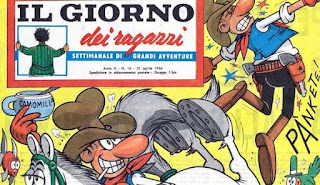 Milan, March 27, 2017 - Just look at the photos. The arms on the table, the pen dipped in Indian ink, a sheet partially drawn a revolver on a printed page. And just the expression of his face to understand the nature of volcanic joy by one of the most brilliant designers of the world of comics: Benito Jacovitti, born in Termoli March 9, 1923 and died in Rome December 3, 1997, ahead of a few hours his wife Floriana Jodice. The photographer frames him - inventor of a hilarious army of bizarre characters and pyrotechnics - laughing. And not to give in to the impulse, he pretends to be concerned about the success of the comic sketched there. The revolver? It's fake, he needs like an iron crafter for when, at noon, with his friend Nevio Zeccara, also a cartoonist and a fan of westerns, the house will simulate a battle between cowboys, with a hand ready to pull out the colt from his pocket. What will people say? "They are crazy!", Because in the 1950s they would have been thought to be terrorists.

Extraordinary Jacovitti, which drew his arm holding his daughter Silvia to make her laugh a bit '. Sixty years ago, March 28, 1957, his tender and clownish drawings gave to Giorno dei ragazzi, a weekly insert of our newspaper, the first amazing adventures of Cocco Bill, a lanky, nervous gunman drinking chamomile tea and riding a horse named Trottalemme, who thinks and smokes and talks, gallops in a fascinating surreal absurd West, where it is to smoke and drink sarsaparilla from morning to night, where the fish fly and from the floor emerge snails and snakes in the cylinders, and where the grassland is dotted with snow-white femurs and other bones, as well as well-cut on the bias salami and red and yellow fish bones. The success was overwhelming, and Jac (one of his signatures, along with "Fishbone") would always boast of a not insignificant detail: "Every Thursday, when he went out with the supplement Cocco Bill, the print run of Il Giorno It increased of 40-50 thousand copies."

At the newspaper, was born a year earlier, April 21, 1956, by Enrico Mattei, the founder. Jac had first experimented with a character of fiction, Gionni Galaxy, then inventing Tom Nosy, journalist-detective. But they were testing stages of his approach. And when the director of Il Giorno, Gaetano Baldacci, asked him "Do something about the West", he churned out Cocco Bill, the character who would give a boost to his already impressive career (he designed the first story in 1940 with "Goofy and the British", and he had long cooperated with the Catholic weekly the Victorious, even creating the hugely popular Diario Vitt). The ramshackle and irresistible western character Cocco Bill soon became a prodigious cultural phenomenon, a kind of antechamber of the spaghetti western, a launch pad in key wonderfully humorous ways the "West of the beggars" - as defined by the same Jacovitti - then it was consecrated on the screen by Sergio Leone.

Cocco Bill galloped on Trottalemme in Il Giorno until 1968. His inexhaustible author, meanwhile, had created a host of other characters, here we try to quote in bulk, taking no account of history: the Arcipoliziotto Cip, Cucù e Chicchirichì, Gamba di Quaglia, Spaccavento, Lolita Dolcevita, Elviro il Vampiro, Baby Tarallo, Tizio, Caio e Sempronio, Zorry Kid, Jak Mandolino, il diavoletto tentatore Pop Corn, Tarallino, Checco, Gionni Peppe, Joe Balordo. In short, compared to the creative effervescence of Jacovitti, Etna mouth has always been little more than a damp squib. They could not, the Molise genius, not to get groped by the monument of literature of all time which is Pinocchio, illustrating it in several editions: the first in 1943, then re-issued for about twenty years.

Newsrooms were frequented by Jac? Since then, the capital for the above reasons, Il Giorno to those of the Catholic newspaper Daily, The Pouring of ideas, Corriere small, Night, Today, The European, Domenica del Corriere, Linus, The Newspaper of Edizioni San Paolo. Continually "rediscovered" as is done with the classics, for these first 60 years of the ineffable Jacovitti Cocco Bill will be repeated in many different ways. He will laugh, taste, or he will contain the expression that we have described, perhaps thinking: "Here I would like a nice Tazzona chamomile! Gnaffe and birignaffe."
Posted by Tom B. at 6:33 AM