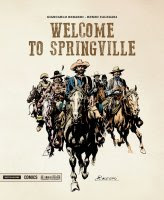 Springville is a frontier town, portrayed in the nineteenth century, and is complementing the phase shift between the buffalo and the railroad tracks.

In these stories there are conflicts between ranchers and farmers, bullying and harassment of those who have contracted the guns, difficulties in imposing the law, immigrants who barely know the language, the last Indians destroyed by alcohol, the sheriffs honest and courageous and those cowards who throw the star in the dust, the particular form of justice guaranteed by bounty hunters, people arrived from there to rebuild their lives and with something to hide. There are men who colonized the border and fail to fit into the urban civilization, preferring to "live their own way, according to the rules of an age that is dying."

"Welcome to Springville" was written and drawn by Giancarlo Berardi and Renzo Calegari and was distributed on newsstands, comic shops and bookstores from starting on November 29, 2014.

Giancarlo Berardi was born in Genoa, Italy in 1949. He debuted collaborating on Tarzan, Sylvester and Diabolik. After graduation, he devoted himself to comics and wrote stories for The Little Ranger, and stories "Cursed Earth" and "Wyatt Doyle." Tiki, was his first series with artist Ivo Milazzo, in 1976, followed in 1977 by Ken Parker.

He created Welcome to Springville, with Renzo Calegari, and "Man of the Philippines" and "Marvin the Detective." In 1986 we wrote Dramatization Sherlock Holmes, to the slopes of Giorgio Trevisan. He then wrote "Oklahoma", the first issue of "Maxi Tex", an episode of Nick Raider, and the stories collected in Reverie and lights and shadows.

After Tom's Bar and Giuli Bai & Co., in 1989, he was among the founders of Parker Publisher, producing new episodes for the "Ken Parker Magazine". The same formula was continued by Sergio Bonelli Editore until 1996.

Since October 1998, Berardi has authored and edited Julia, a monthly of Sergio Bonelli Editore. Songwriter for pleasure, in 2002 he wrote "Echoes of Distant Lands", a CD dedicated to Ken Parker.