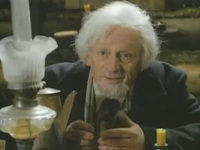 A wonderful man, a great master and a great friend, went away, and with him a piece of us left ... There is a vast emptiness, an indescribable sadness and sorrow. "We thank you for every beautiful moment, and we will miss you very much and will never forget." Witold Pyrkosz was born on December 24, 1926.  He graduated from the State Higher School of Actors in Cracow.  He played, among others.  In "The End", "Vabank", "Janosiku", "Alternatives 4" or "Four Armor and Dog" series.  He co-wrote and directed the cabaret "Dreptak".  Since 2000 he played Lucjan Mostowiak on the show "M as love". He appeared in one Euro-western as Andy Carson in the TV series ‘Alaska Kid’ in 1991.
Posted by Tom B. at 7:28 AM