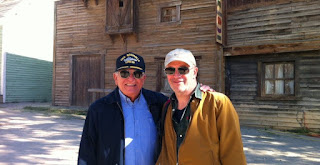 It seems like an anecdote from another era. That two fully consolidated filmmakers in the industry coincide by locating in Fort Bravo, a western town of Tabernas, Almeria, the land that has served as the stage for the most remembered films of today's admired spaghetti western, only helps us to verify that the land of the Indalo lives the second best time of its brilliant film history.

A time that is only obscured by the glow that shone in the 1960's, when Almería was known in the dream industry as the Hollywood of Europe. At that time Sergio Leone became, very much to his regret, the father of a subgenre that more than fifty years later continues to reinvent itself. 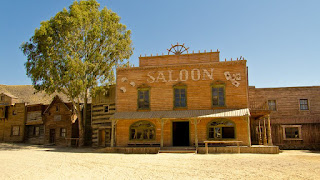 Well, the anecdote to which we refer, which we have the privilege of counting first film, was led by directors Enzo G. Castellari and Jacques Audiard, who coincided in the Fort Bravo studios while locating for their respective films, which will start filming very shortly

But this meeting is even more relevant because both filmmakers are going to shoot western films, the same one that is continually being buried alluding to the topics, but that does not stop illuminating recent titles of great success and repercussion. The Hateful Eight, The Salvation, Bone Tomahawk, The Magnificent Seven, Debt of Honor ... are good examples that confirm that the western still has the revolver and is ready to fire.

Jacques Audiard, responsible for films highly valued in European cinema today as a prophet or Dheepan, changes record and delves into a very promising western, both for the story and for the cast that is attributed to him, a trio starring Joaquin Phoenix, Jake Gyllenhaall and John C. Reilly.

The film will be titled, in principle, as the novel on which it is based, The Sister Brothers, written by Patrick deWitt. It tells the story of two brothers chasing after a bandit in the Oregon desert. One of them will ask if what he does makes some kind of sense.

The Sister Brothers - not to be confused the translation would be "Brothers Sister" -, is in the phase of pre-production and its filming will begin in a few weeks. The town of Fort Bravo de Tabernas will be its main center of operations in the province of Almeria.

Enzo G. Castellari, one of the most outstanding directors of the glorious age of the spaghetti western, with titles of the genre shot in Almeria as Mátalos and returns or Los locos del oro negro, among many more, returns to Almería to shoot the sequel to one Of the most mythical characters of the European western, Keoma, who incarnated Franco Nero, who is also expected to star in this new film.

The first installment of Keoma, which was not filmed in Almeria, titled like the name of the character, was released in 1976, at a time when the best western European films had already been made. But Castellari, symbolically, buried the spaghetti western with the last great work of this subgenus, and which is also for many the best film of its director.

It has been 41 years and Keoma will be resurrect in Almeria with the same tandem that gave him life, Castellari / Nero, and under the title of Keoma Rises. Little do we know about the project yet. As the weeks progress, details will be revealed. For now it is known that it is in the pre-production phase and that in not much more than a month will begin filming in the villages of the province and other locations in Almeria.

Castellari announced his intention when he was invited by the Almeria Western Film Festival of Tabernas, an appointment that evidences the strength and new dimension that the western has gained internationally, to receive a warm tribute in 2014. In that occasion he visited some of the locations in which now we will hear the action commanded again! And his future collaboration was conceived, this time as an actor, in a new western, Stop Over in Hell, by Victor Matellano, and that was the closing film of the last edition of the Almería Western Film Festival.