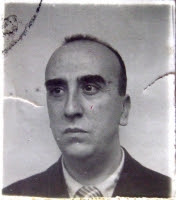 RIP Francisco Pérez-Dolz. Francisco Pérez-Dolz has passed away at the age of 95 in Barcelona.  His debut film 'A tiro limpio' (1963), shot in Barcelona, is considered to be a classic of Spanish police cinema. The valued filmmaker with more than a fifty year career made only three feature films as a director: 'A tiro limpio', 'El mujeriego' (1964) and 'Los jueces de la Biblia' (1965).  He learned in a self-taught way.  It began as a meritorious and assistant camera operator.  Later he was an assistant director until becoming a producer of advertising and industrial cinema. He was an assistant director on “The Savage Guns” (1962) and a cameraman on “Shoot to Kill” (1965).
Posted by Tom B. at 8:32 PM