Skorpio is an Italian weekly comic magazine, published since 1977 by the Roman publishing company Eura Editoriale and since 2010 by Editoriale Aurea.

It is the "twin" of Lanciostory, magazine similar in content and editorial layout published by the same publisher. The Italian magazine including the name of the one originally published in Argentina from 1974 to 1996 (subtitled El mundo de la grand historieta) by Ediciones Record.

With the disappearance of the "container magazines", ie those magazines comic who had no continuing characters, but anthologies of very different schools of comics each other (examples are Eternauta, Comic Art, Orient Express) remains, with its  “twin”, the only Italian example of periodic anthology comic.

Initially it exclusively presented works by Latin American authors and a few Italians, that was also an opening to the Belgian market. 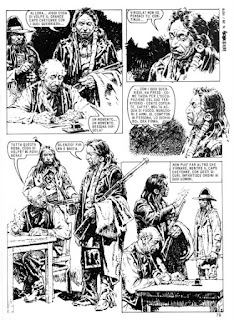 Renzo Calegari was born in Bolzaneto (Genoa) on September 5th., 1933. He starts working in the comic book world with Studio D’Ami and, in 1955, draws "I tre Bill" (written by Gianluigi Bonelli) and "El Kid", together with Gino D’Antonio. He later creates "Big Davy" for Edizioni Araldo, but he becomes officially recognized as master of the western genre with "Storia del West", where he starts working , always with D’Antonio, in 1964. After a brief period of comic book inactivity, due to his focusing on politics, Calegari returns to his beloved West with "Welcome to Springville", a miniseries written by Giancarlo Berardi for "Skorpio", later reprinted in three volumes by L’Isola Trovata (and, more recently, in a volume publisehd by Le Mani). He did other works for the "Orient Express" magazine and with "Il Giornalino", for which Calegari creates the series "Boone" and "Gente di frontiera". For Tex, Calegari debuted with "La ballata di Zeke Colter" (penned by Nizzi), printed on Almanacco del West 1994. His art appears on "Bandidos!", a one-shot published in the summer of 2007 and scripted by Gino D'Antonio.
Posted by Tom B. at 6:58 AM