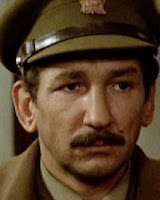 Legendary Croatian actor  Relja Bašić died in Zagreb, Croatia on April 7th. He was 87. Born in Zagreb on February 14, 1930, he graduated in acting from the Academy of Dramatic Arts in the class of dr. Gavella. He would go on to appear in 4,213 stage performances in 340 cities and towns Croatian, Yugoslavia and abroad. He also appeared in 127 films both domestic and international. He entered politics in 1990 and in 1992 was elected to a seat in parliament representing Zagreb. Relja appeared in only one Euro-western as the Commandante in 1961’s “A Taste of Violence” starring Robert Hossein.
Posted by Tom B. at 8:21 AM