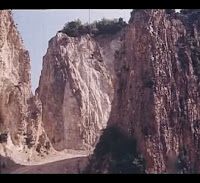 We continue our search for film locations for “Death Rides a Horse”. After we see the young Bill practicing the film switches to a man named Ryan working on a prison work gang. He is brought to the prison warden and given his release after a 15 year sentence. We understand from the conversation between Ryan and the warden that the prisoner was set up to take the fall for his fellow outlaws. Immediately we see a revenge tale coming into play.