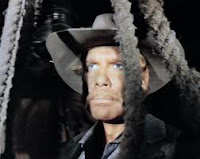 Born Günter Ramsenthaler on April 30, 1928 in Edelsfiedl- Weißenberg, Bavaria, Germany, we know him as actor Peter Carsten. Carsten took on his first role at the youth theatre in Hannover in 1948. He attained fame with his appearance in "08/15". He would go on to appear in over 100 films in various genres, including "Nachts, wenn der Teufel kam" (The Devil Strikes at Night) (1957) directed by Robert Siodmak.


In 1957, Carstenn also appeared beside Marcello Mastroianni in "La ragazza della salina" (Sand, Love and Salt) by Czech-born director František Čap, which was filmed at the Sečovlje salt-pans and in Piran.


After Peter retired he lived in the seaside town of Lucija, Piran, Slovenia where he died on April 20, 2012.


Today we remember Peter Carsten on what would have been his 85th birthday.
Posted by Tom B. at 5:54 AM