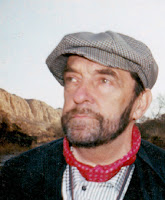 Serbian art director and production designer Veljko Despotović died April 6, 2013 in Belgrade, Serbia. He was 83. Born in Zagreb, Croatia on October 1, 1931 and graduated from the University of Belgrade Faculty of Architecture in 1958, after which he continued with designing theatre, film and television sets. Between 1950 and 1962 he was working as an assistant in the art department and as an architect in theatre, film and television. Since 1962 he worked as an independent set designer in Serbian and foreign films. He worked on over 150 domestic and foreign movies and co-productions.

YouTube video of his set designs: http://www.youtube.com/watch?v=aNmDSjh4kUk
Posted by Tom B. at 10:10 AM