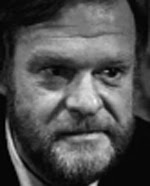 Carlo Hintermann was born on April 2, 1923 in Milan, Lombardy, Italy. He was sometimes referred to as Hinterman and was an Italian actor and voice actor active in film, theater and television from the 1950s until his death in a car accident at the age of sixty-five.


He debuted in films in 1950 in the film “Miss Italy” by Duilio Coletti. He is remembered for appearing in several television dramas of the sixties. He also appeared in summer theater during the 1950s and 1960s. Hintermann appeared in only one Euro-western as Jude Anderson in “Wanted” (1967) starring Giuliano Gemma.

Today we remember Carlo Hintermann on what would have been his 90th birthday
Posted by Tom B. at 5:36 AM