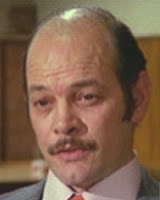 Luciano Catenacci was born on April 13, 1933 in Rome, Italy. He became an actor and production manager working mainly in Italian produced films during the 1960s, 1970s and 1980s. He produced the horror film “Operazione paura” (Kill, Baby, Kill) in 1966. Luciano was seen in nine Euro-westerns from “A Colt in the Hand of the Devil” (1966) to “Carambola (1974). He was sometimes billed as Lewis Lawrence and Max Lawrence.  He died in Melbourne, Australia on October 4, 1990 following complications from heart disease. We remember Luciano Catenacci today on what would have been his 80th birthday.
Posted by Tom B. at 10:40 AM