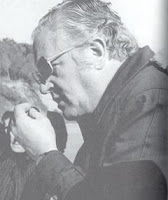 Amando De Ossorio Rodríguez was born on April 6, 1918 in La Coruna, Galicia, Spain. He was one of the foremost Spanish film directors during the European Horror film surge in the 1970s, known especially for his Blind Dead films, a series of violent horror films which featured a never-before-seen type of monster. De Ossorio not only directed his horror films, he also wrote the screenplays for most of them and even came up with the original story ideas and plots in most cases (although producers sometimes tampered with the end product).


In interviews, De Ossorio complained about the mercilessly tiny budgets he was forced to work with, and he lamented that in almost every case, the finished project never even came close to what he had envisioned when he first conceived each film. Perhaps the prize for worst special effects scene in film history may have to be awarded to the obvious toy boat that sinks at the finale of "The Ghost Galleon" (1974); it didn't even look like a toy, but rather more like a folded piece of cardboard! De Ossorio was disgusted when he saw how little money and effort went into realizing that key climactic scene, remarking that it showed how little the producers cared about the quality level of their movies.


Today we remember Amando De Ossorio on what would have been his 95th birthday.
Posted by Tom B. at 7:16 AM