RETURN OF THE HOLY GHOST 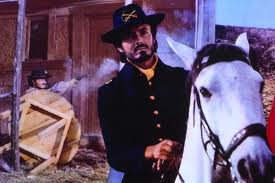 Lieutenant Albert Donovan’s handicapped brother, has married the girl he, Spirito Santo, is in love with. Donovan’s earned the nickname Spirito Santo because he always seems to be in the right place at the right time and stands up for justice in an evil and corrupt world. A gang, led by a bandit named Diego of Habsburg, continually robs the gold shipments departing from Fort Phoenix. Lieutenant Donovan is asked to investigate the case and discovers that the bandits grow more frustrated with each robbery because the ingots are replaced by fakes. Diego thinks a treacherous sergeant is behind all of this, but Spirito Santo reckons the affair might be more complicated. Also in suspicion are also cast upon his own commanding officer and a banker