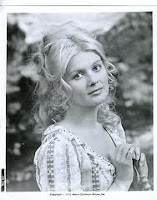 Pamela Tiffin Wonso was born on October 13, 1942 in Okalhoma City, Oklahoma and grew up in Chicago, Illinois where she achieved success as a teen model. She attended Hunter College and moved to New York. She was discovered by Hollywood producer Hal Wallis having lunch at the Paramount Pictures studio commissary while on a visit to Los Angeles with her mother and cast in a film version of the play “Summer and Smoke” by playwright Tennessee Williams.

Tiffin then starred opposite screen legend James Cagney in the comedy “One, Two, Three” (1961) directed by Billy Wilder. She won a Golden Globe nomination for this film as well as for “Summer and Smoke” (1961). She also did television work, appearing opposite David Janssen in The Fugitive episode "The Girl from Little Egypt" in 1963.

There were leading roles in the musical “State Fair” and the comedy “Come Fly with Me”. She co-starred with Burt Lancaster in the western “The Hallelujah Trail” (1965) and with Paul Newman in the private-detective film “Harper” in 1966. In 1968, she co-starred with Nino Manfredi and Ugo Tognazzi in one of the most famous Italian comedies “Straziami, ma di baci saziami” by Dino Risi.

The February 1969 issue of Playboy did a photo feature entitled "A Toast to Tiffin". Also in 1969, she co-starred as a liberal college student and the love interest to Peter Ustinov in the comedy “Viva Max!”. From 1965 to 1974 she appeared mainly in European exploitation films including her only Euro-western “Deaf Smith and Johnny Ears” with Franco Nero and Anthony Quinn, before retiring to be with her family. She appeared as herself in a 2003 documentary, Abel Ferrara: “Not Guilty”, opposite her daughter Echo Danon.