With photo designs and documentation Malcamino's, Association of Towns of the Interior has launched this year a tourist film route, while others dedicated to 'cycling' or 'towers and castles', it is an ambitious Tourism Plan by Filabres-Alhamilla.

With perfect knowledge of the region and its history of film by Malcamino's it has all been captured in an attractive guide that invites us to explore the main set of Almeria over sixty years of relationship with the cinema.

With a profusion of texts, pictures, posters, and a complete road book with maps and GPS coordinates, tourist information, a wide selection of frames and a list that covers up to 274 productions from 1956 to 2009, the guide offers 80 pages in Castilian and 65 in English, in an extremely visual and practical issue. 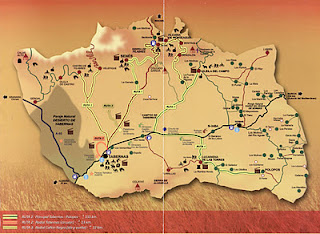 A tour of more than 150 kilometers forming a generic route to Polopos entitled De Tabernas a walking tour with places of interest, noting the key points with informative panels.

From Tabernas for the villages of the region, is highlighted locations Uleila del Campo, seen in “Patton” (1970), Lucainena of Torres, “Pistols Don’t Argue” (1964), or the village of Polopos with a Mexican atmosphere seen in numerous Westerns, and the newest addition of Senés in “Los límites del control” (The Limits of Control) (2009). 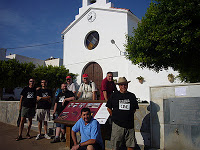 Next to this, they have planned two specific tracks, over a dozen kilometers.

A circular route from the village of Tabernas, for walking and cycling, with sections on foot, walking Castle Tabernas and Red Canyon, Rambla del Búho with its famous 'Totuga' and Mount Castillejo o Cabezo del Águila. 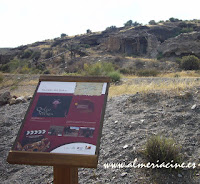 The third option is a return path through Black Canyon, which enters the south side of the Sierra de los Filabres, also called the Rambla del Saltador. Several panels along a walk and pathway show scenes from films like “100 Rifles” and “Chino”. 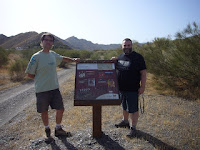 The guide is free and available to anyone interested at the various centers recently opened in the region: CI of Traditional Architecture in Filabres Castro, CI Terrera Ventura and Tabernas Desert in Tabernas, and CI Labour, in Uleila del Campo. 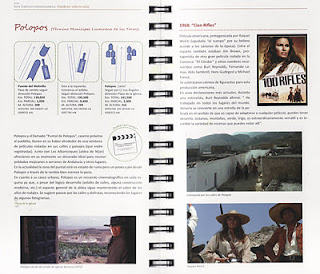 You can read their schedules on the website of the Association of Municipalities.
Link http://www.mancomunidadpueblosdelinterior.es/
It is also available online for download in pdf .