Who are Those Guys - Pasquale Basile 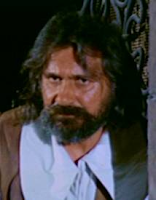 Italian actor Pasquale Basil first appeared on screen in the 1959 action film "Agi Murad il diavolo bianco" directed by Riccardo Freda. He continued to appear in Sword & Sandal and action films until his first appearance in a Spaghetti western with 1965's "The Two Sergeants of General Custer" starring Franco and Ciccio. During his acting career Pasquale was credited under several pseudonyms including Pasquale Negro and Pat Basil. In the 1970s he added Master of Arms to his resume as well as acting. His last appearance was in 1978's "Stunt Squad". Basile appeared in over 25 films among them ten Euro-westerns all as a supporting actor.