THE JUDGMENT OF GOD 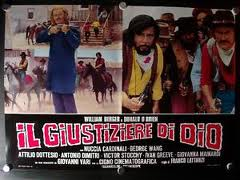 Tony Lant a famous Arizona gunslinger, leaves his wife Carol and his gun when his son accidentally falls into a pit and dies. He becomes a priest and builds a mission with an adjoining orphanage. Now known as Father Lanthony he ignores the fact that in the basement of his church lies hidden a large quantity of gold bars, the result of a robbery. Two bands at the same time go on a treasure hunt and the men of Ramon Orea, also called the gang of the Tris, immobilize the priest, and open the passage to the gold with dynamite. They seize the gold but kill all the children in the orphanage. Tony is released from the well where he’d been thrown by his faithful servant Goliath and begins to hunt for the bandits. After a long search, he tracks them down through their spending of the spoils from the robbery. The priest draws the survivor of the Tris gang to the mission and into the hands of the sheriff who captures him with large posse. Having in the meantime also witnessed the death of Carol, the former gunslinger is directed towards an Indian reservation where he will continue his ministry.