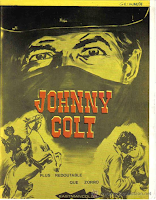 In New Mexico a town is terrorized by a corrupt banker and his gang of henchmen. The banker in turn is terrorized by a mysterious masked hombre called Starblack, who leaves a black star on the spot as a symbol of justice, similar to Zorro leaving the mark of a ‘Z’. In one particular scene our hero has saved the day and looking up at him adoringly a young woman admiringly calls out "Starblack!". The secondary story is about young Johnny Blyth returning home after a misadventure in Colorado and discovers his father has been murdered. Johnny is accompanied by his loyal servant, who is closely modeled after Zorro’s Bernardo, who pretends to be a mute, which enables him to gather useful information for his master. Of course these two turn out to be Starblack and his companion. Both turn the tables on the banker and his gang who they find out are the murderers of this father.

Robert Woods sings the main theme "Starblack" http://www.youtube.com/watch?v=Qq0cWwN0BKQ
Posted by Tom B. at 7:14 AM