Who are Those Guys - Richard Basehart 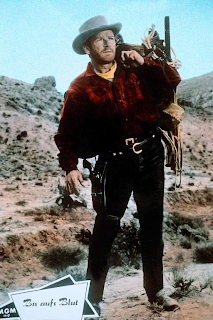 John Richard Basehart was born on August 31, 1914 in Zanesville, Ohio. After starting his career on Broadway he came to Hollywood in 1947 and immediately made his mark when he appeared as the killer in the film "He Walked by Night" (1948). This was followed up by a role as a psychotic killer in "Roseanna McCoy" (1949). During filming of the film "Fourteen Hours" in 1950 his wife, Stephanie Klein died from a brain tumor. He then appeared in the film "Telegraph Hill" (1951) where he met and married Italian actress Valentina Cortese [1925- ]. This opened the door to Richard appearing in European films such as "La Strada" (1954). The couple divorced in 1960 and Basehart went on to find stardom as Admiral Nelson on the TV series "Voyage to the Bottom of the Sea" (1964-1968). Basehart was one of the first American actors to appear in a European western when he played gunman Steve Fallon in "Savage Guns" (1961). He later appeared as Nye Buell in "Chato’s Land" (1971). Basehart’s deep voice led to voice-overs in documentaries and he was the narrator of the closing ceremonies of the 1984 Olympic Games held in Los Angeles. Shortly afterward he suffered a series of strokes and died on September 17, 1984 in Los Angeles.