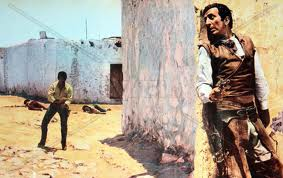 In Santamargo, Mexico, Samantha Felon kills her husband to inherit his ranch. Samantha is unable to find the will and fears that the property will go to Felton’s nephew of who has recently arrived for the festival of San Fermin and is known as Johnny Yuma. Samantha stays in seclusion with the help of Don Pedro, her younger vicious brother. She hires a famous gunslinger, Linus Carradine Linus to eliminate Johnny. But in the meantime, Johnny and Carradine have the opportunity to meet, and save each other's lives. As a token of the their friendship they exchange guns. Johnny, then, comes to Santamargo first and is thought to be the gunman Carradine because of the initials on his exchanged holster. Yuma takes the opportunity to appear at his uncle's house and open the safe which holds the secret will. Discovered, he is brutally beaten. When it is once again out in force and freedom. He is then confronted by Linus, who intends to keep his commitment to Samantha, and invites Johnny to fight him in a duel. But soon the two realize they have into a trap, and of both have been sentenced to death by Don Pedro and his henchmen. They readily reconcile and destroy the whole band. Johnny returns to the ranch to find Linus dying and Samantha dead

YouTube link: http://www.youtube.com/watch?v=-PVrJtyqr3Y
Posted by Tom B. at 6:21 AM