Who are Those Guys? - Walter Barnes 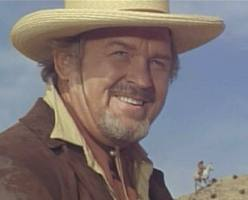 Walter Lee Barnes was born January 26, 1918 in Parkersburg, West Virginia. As a young boy during the depression he stole a pig to put meat on the family table. The police knew Walter was guilty of the deed but when they came to investigate they could find nothing. Walter said, "We ate the evidence." From that day forward all his friends called him ‘Piggy’. Big for his age Walter was a football player on the Parkersburg High School’s undefeated team of 1938. Following military service Walter enrolled at Louisiana State University and not only played football but became a collegiate weightlifting champion. Following graduation he was signed by the Philadelphia Eagles and became an All-Pro guard. After three years he retired and became a football coach for Columbia University and Arizona State. While playing for the Eagles Walter appeared on a local TV series called "Action in the Afternoon" on WCAU. Walter Silver a producer for Warner Brothers offered him a Hollywood contract and Barnes appeared on several TV series including "Cheyenne", "Have Gun - Will Travel", "Bronco", "Gunsmoke" and "Bonanza". He also appeared with John Wayne in "Rio Bravo" as Charlie the bartender. Kirk Douglas recommended him for a TV series he was making in Europe called "Tales of the Vikings" so in the early 1960s Walter moved to Germany. While there he appeared in several Winnetou films and married Britta Wendel. They had two children Daniela Rachele (now the actress Lara Wendel) and Michel. After Britta and Walter divorced he moved to Italy and appeared in a number of Spaghetti westerns including his most memorable role as Brokston in "The Big Gundown" (1966). Barnes moved back to the U.S. in 1969 and appeared in several films including "Cahill U.S. Marshal" (1973) once again with John Wayne and several Clint Eastwood films including "High Plains Drifter" (1973), "Every Which Way but Loose", and "Bronco Billy" (1980). Walter retired from acting in 1987 and took up landscape painting. Walter ‘Piggy’ Barnes died in 1998 from diabetes at the Motion Picture Home in Woodland Hills, California.