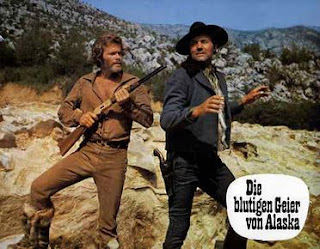 During the peak of the Alaskan gold rush, an old prospector is mining gold in caves under an Inuit burial ground. He and his son Billy are injured when a tunnel collapses. A trapper named Don Rutland happens by and rescues Billy, who needs urgent medical attention. Don then tells the prospector he’ll take him on his dog sled to the nearest town. After Don departs with Billy, the injured prospector stays behind, unaware of the angry natives who are watching him from the woods. Everything is set up for a tale of cursed gold, vengeful spirits and vicious huskies.

Upon reaching town Don entrusts the unconscious Billy to Sheriff Cotton, who is escorting a wagon load of gold from Camp Kino to Paradise Creek. He then returns to the prospector, just as the old man dies from an attack by the Indians. With his dying breath, the prospector entrusts Billy’s care to Don.

Meanwhile the gold shipment is ambushed. Buffins - the scout responsible for the ambush - returns to town with a tale of his harrowing escape from the bandits on the trail. The townfolk hail him as a hero and instantly give him the late Sheriff's job. He immediately begins riling up the townsfolk, making them suspicious of the local tavern keeper - the only man who didn't send his gold along on the shipment.

Don teams up with Rose (the late Sheriff's daughter) and Ham (a wandering bare-knuckle boxer) to expose Buffins and rescue Billy from the vicious bandits who have adopted him and nursed him back to health in order to obtain the kid’s gold mine. Don and Billy return to the wilds of the Alaskan wilderness.
Posted by Tom B. at 6:30 AM