HE WAS CALLED THE HOLY GHOST 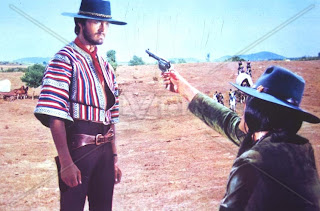 The owner of a ranch bails the Holy Ghost out of jail and hires him to rob a train robbery of a shipment of gold. The Holy Ghost hires some men, and robs the train which leads to the death of Consuela (daughter of the owner of the ranch and loved by the Holy Ghost): The ranch owner accuses the Holy Ghost who is forced to kill him. An Indian Sheriff who turns out to be Consuela’s brother and is convinced the Holy Ghost is guilty, arrests the Holy Ghost and takes him to testify at a trial. The Holy Ghost could easily kill the sheriff, but he resists the temptation and prefers instead to tell him that his sister's death is due to two white assailants seconds before he could rescue her.
Posted by Tom B. at 6:12 AM