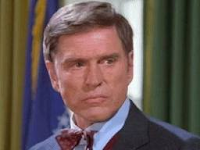 Gervase Duan "G.D." Spradlin, a character actor best known for playing authority figures in television and films, including "The Godfather: Part II" and "Apocalypse Now," has died. He was 90. Spradlin died of natural causes at his cattle ranch in San Luis Obispo on Sunday, said his grandson, Justin Demko. A former oil company lawyer and millionaire independent oil producer who didn't begin acting until he was in his 40s, the tall and lean Oklahoma native played his share of doctors, ministers, judges, military officers and historical figures during his more than 30-year acting career. He portrayed President Lyndon Johnson in the 1985 TV mini-series "Robert Kennedy & His Times" and President Andrew Jackson in the 1986 TV movie "Houston: The Legend of Texas." His breakthrough movie role as a character actor was as corrupt Nevada Sen. Pat Geary in director Francis Ford Coppola's "The Godfather: Part II" in 1974. Five years later, Spradlin was the Army general who sent Martin Sheen's Capt. Willard up river to find and kill Marlon Brando's Col. Kurtz in Coppola's Vietnam war movie "Apocalypse Now." Spradlin retired from acting after playing Washington Post editor Ben Bradlee in the 1999 comedy "Dick."

The son of two school teachers, Spradlin was born Aug. 31, 1920, in Pauls Valley, Okla. He received a bachelor's degree in education from the University of Oklahoma before serving in the Army Air Forces in China during World War II. After earning a law degree from the University of Oklahoma in 1948, he became an attorney for Phillips Petroleum Co. and then became head of Phillips' legal department in Caracas, Venezuela. After returning to Oklahoma in 1951, Spradlin became an independent oil producer. He was so successful that he retired in 1960 and spent time cruising the Bahamas with his family on a yacht. Spradlin's first wife Nell, with whom he had two daughters, Tamara Kelly and Wendy Spradlin, died in 2000. In 2002, he married Frances Hendrickson, who survives him, as do his two daughters and five grandchildren.
G.D. Spradlin appeared in one Euro-western 1971's "The Hunting Party" as Sam Bayard.
Posted by Tom B. at 3:28 PM