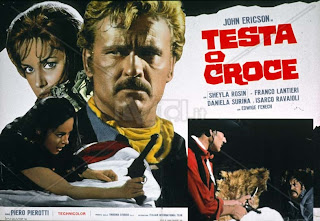 Shanda, who is the star attraction of the Plata City saloon, is accused of killing the banker Burton. To keep her from being lynched by the Quaker women in the area, the sheriff sends Shanda, with two of his deputies to Phoenix for trial, during the journey, they encounter a shady character named Bear, the three rape the saloon girl and leave her in the desert. The young woman is found by an outlaw named Black Talisman, who takes her to an abandoned town where he has taken refuge along with two Indians. Here Shanda recovers her health, while the bandit falls in love with her. Talisman returns to Plata City to try and exonerate Shanda. He pretends to be a gambler and kills the two deputies, then goes in search of Bear. Sybille, the widow of the banker confesses that she was the one behind the killing of her husband by Bear. Talisman goes to the hut of Bear, where he forces him to sign a statement admitting his guilt, but at that moment Sybille arrives and threatens to kill Talisman and Bear. They manage to disarm and leave her stunned in the hut which catches fire from a fallen lamp. The sheriff is given the confession of Bear. Talisman tells the sheriff that according to his desire, if he is ever killed or captured the reward on his head is to be paid to Shanda. Concluding the pact, Talisman returns to the abandoned town and Shanda.
Posted by Tom B. at 7:13 AM