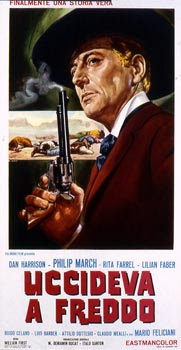 
A butler named Jose Desmet, has killed his employer, a former District Judge, who at one time years before, condemned Desmet's father, a famous outlaw, to death. Then Desmet tries to seduce a miner named Salazar's daughter, who is heir to a goldmine. He also kills another woman and the town doctor because they have found out that he was selling weapons to the Indians. A government investigator, Bill McGregor/Walcom, together with the local sheriff, sets out to put an end to Desmet's atrocities and outlawry once and for all.
Posted by Tom B. at 6:48 AM