Who Are Those Singers & Musicians? – Fred Bertelman 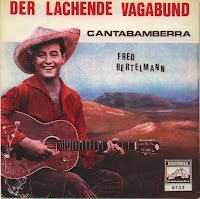 Fred Bertelmann was born in Duisburg, North Rhine-Westphalia, Germany on October 7, 1925. At the age of nine he became a chorister and later studied cello, trumpet, guitar and singing.

In World War II, he fought in the Wehrmacht but then became a prisoner of war and was sent to Alabama, where he first heard of swing music. After his return to Germany, he founded his own band and often performed in American GI clubs in Germany. In 1950 he toured Sweden with Arne Hülphers and Zarah Leander. He also worked as a solo singer of Schlager songs. Bertelmann worked as an actor in the 1950s and 1960s, in movies as well as in stage plays.

He married television presenter and actress Ruth Kappelsberger in 1966. In late 2013 he suffered from severe pneumonia. Fred Bertelmann died on January 22, 2014 in Berg, Upper Bavaria. He was 88 years old.