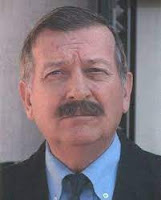 Italian, director, assistant, director, author, composer, cinematographer and actor Ferrucio Castronuovo died in Vivo del Galgano, Italy in March 4, 2022. He was 81. Born in Rome on September 10, 1940. After completing a directing course at RAI , he worked from 1964 as an assistant director and cameraman, while as an actor he continued until 1997. In 1972 he directed Sonata al chiaro di luna (Sonata in the Moonlight) for the anthological series Experimental films for TV : also for television, in the following years he was involved in the production of programs such as TV7 , Stasera G7 and Tam Tam , also directing some documentaries on the works by Federico Fellini. In 1996 he directed his only film Gratta e vinci (Scratch and Win), of which he also co-wrote the soundtrack. Castronuovo was an assistant director on Ranch of the Ruthless (aka Oklahoma John) in 1965
Posted by Tom B. at 7:47 AM