We continue our search for filming locations for “Run, Man, Run”. Mayor Bannington reads the message from Riza to the townspeople and tells them he will hand over Cassidy and Cuchillo to the outlaws. He’s interrupted by Cassidy standing on a rooftop who says, “Good idea. If you think you can do it.” He then reminds the mayor he’s late for an appointment with him. 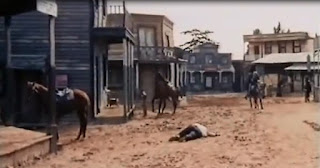 This scene was shot at the western set at Elios Studios in Rome.