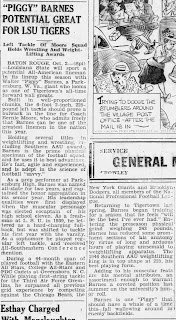 BATON ROUGE, Oct 2 – Louisiana State will sport a potential All-American lineman in its lineup this season with Walter ‘Piggy” Barnes, a Parkersburg, W. Va. giant who looms as one of Tigertown’s all-time forward wall greats.

Built in a well-proportioned chunks, the 6-foot 2-inch, 225 pound left tackle should prove a bulwark in the line for Coach Bernie Moore, who admits freely that Barnes can be one of his greatest lineman in the nation this year.

Holding several titles in weightlifting and wrestling, including Southern AAU awards, Barnes is the prime physical specimen of the football squad, and he uses it to best advantage. He’s fast, agile and experienced, and is adept in the science of football “savvy”.

As a prep performer at Parkersburg High, Barnes was named all-state for two years, and captained the honor aggregation in his senior year. His leadership qualities were first displayed when the muscular personage was elected co-captain of his high school eleven. As a freshman at L.S.U. in 1939, he lettered as a hard-charging fullback, but was shifted to tackle his first year with the varsity. As a sophomore he played regular left tackle and received All-Southeastern Conference mention.

During a 44-month span of playing football with the Eastern All Stars, College All Stars and PDC Cadets at Greensboro, N.C. While playing first-string tackle for the Third Air Force Gremlins he surpassed all previous grid experience by competing against the Chicago Bears, the New York Giants and Brooklyn Dodgers, all members of the National Football League.

Returning to Tigertown last spring, Barnes began training for a season that he feels “will be the best I’ve ever had.” Entering the preseason physical grind weighing 243 pounds, Barnes has reduced some prominent sections of his anatomy by virtue of long and arduous hours of playing nursemaid to weightlifting apparatus. The 1946 Southern AAU weightlifting king is in top shape at 225, his best playing form.

Adding to his muscular feats are his mental attributes an assortment enough to warrant Barnes a coveted position last summer on the university’s honor roll.

Barnes is one “Piggy” that should have a whale of a time this fall wallowing around in enemy backields.