After the East German film Osceola, now comes Tecumseh. And once again an historical name of a great Indian hero who gave the name to the DEFA film. However, IN the order of their appearance in American history IT is reversed: Tecumseh marks the beginning and Osceola the end of a decisive stage in the struggle of the indigenous peoples of North America against impending doom.

1811. While in old England, as the first maritime and trading power, was in danger of new serious blows from the Napoleonic army, the former English colonies of North America - and now the United States - are experiencing a rapid and cynical expansion. Naturally, the greed of the whites is directed to the hunting grounds and settlements of the Indians. Bribery, deceit, threats and persecution... They do not disdain any means to expel the indigenous population. Governor Harrison, for example, uses tribal divisions to conduct business and negotiate "treaties" with individual chiefs. And he succeeds: the large white spots on the map in his office are gradually disappearing. The frontier is constantly shifting, and the Indians are being pushed back into the deserted regions of the West.

In the current situation, the leader Tecumseh is aware of the mortal danger and at the same time understands by what means it can be effectively dealt with. Indian land is inalienable property! This is the motto under which he gathers his ever-increasing followers and in accordance with which he acts. His stubborn efforts to unite the Indian resistance are not in vain: the advance of the whites to the West is temporarily stopped and can only be continued with very serious support from the army. Tecumseh, who fell in battle against American troops in 1813 (the year of the “Battle of the Nations” near Leipzig), went down in history as one of the most significant representatives of the Indians of North America.

The new film by DEFA studio colorfully paints a picture full of adventures and important stages of Tecumseh's life. At the same time, the authors (screenplay: Rolf Römer, Wolfgang Ebeling), without abandoning the tried and tested means of action cinema, try to place dramatic accents in such a way that they correspond to the historical sequence. This is another great attempt to turn an "Indian" film into a historical one. And again, Goiko Mitic in the role of Tecumseh is at the head of the international list of actors employed in the film. 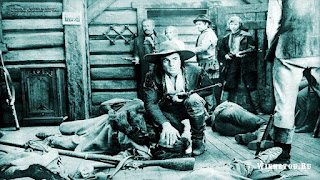