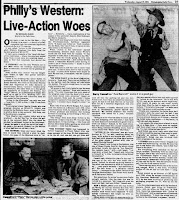 Once upon a time in the Old East – City Avenue, to be exact – a bunch of urban cowpokes rode the suburban sagebrush in front of the live TV cameras.

It was called “Action in the Afternoon,” an adult Western broadcast live daily from the backlot prairie of WCAU-TV.

It was a pure example of the “good old days” of live television – where the good guy would jump from a roof onto his waiting steed – only to find that somebody had moved the steed.

IT PROBABLY was the only Western set in the 1800s where the cowboys’ shoot ‘em-ups were occasionally drowned out by passing airplanes.

Some reckon the “Action” was the illegitimate father of CBS’ (the parent network) “Gunsmoke”.

There is no doubting the talent stable. It’s graduates include Richard Lester, the show’s music director, who went on to direct Beatles films and “Superman II”; John Zacherle as ornery Grimy James, “Actions” resident dirty old character, who later went on to find ghoulish popularity on Channel 10’s Roland, and “Piggy” Barnes, an ex-Philadelphia Eagle who went on to star in Tv’s “Walking Tall”. The show’s hero, the late Jack Valentine, used his own name for his character.

It all started when Charlie Vanda, who was program director WCAU-TV (which was owned by the Bulletin then), went to New York to pitch a show to the network. “Bill Bode, one of the directors recalled.

“Now Charlie was a master talker and a top producer – he did “Big Top.” So when the people at the network didn’t like the show he pitched, he adlibbed ‘Action in the Afternoon.’ I mean he made it up off the top of his head – all about a live-action Western on the backlot of what had been an old dairy farm.”

THE NETWORK brass and buyer liked the idea so much they ordered a pilot. In their honor, the name of the Montana town in “Action in the Afternoon” – Hubberle – was a combination of the names of the network’s buyers, Hub Robinson and Harry Ammerle.

Hard work and long hours went not making the five-times-a-week, half hour segments work. “It damned near killed us,” Bode recalled. But for Bode, who was 27 then, it was a valuable lesson in the business.

When “Action in the Afternoon” started broadcasting, director Bode found WCAU’s locale did not bode well for realism. It was supposed to take place in Montana in the ‘80s,” he said, “But trucks going up City Line Avenue didn’t know that – and neither did the planes. I remember Richard Lester having to create a lot of ‘vanilla music’ – music to cover the outside noise.

Bode also had to ride his cart in more ways than one. “I had to learn how to ride a horse,” he said, “I found those horses were stupid as hell. We had one, I remember, who bit a microphone. 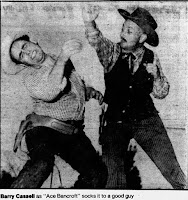 “WE WERE FLAKY in the shows beginning, insecure.” Bode said. There was an outdoor set in the backlot, and the indoor set was inside the station. The actors would have to run like crazy between sets.”

“My guess is that it only lasted a year because we never had a sponsor,” Bode said matter-of-factly. “The only kinescopes that were made of the program came from the show’s first week, and those shows were atrocious.” Based on those samples, Bode said, he couldn’t blame prospective sponsors from steering clear of the Western. “I wouldn’t have bought it either,” he said.

Bode who lives in North Bergen, N.J. stayed with the station as a director until 1956. After some free-lance work, he returned to WCAU as a writer, producer and director. He’s looking forward to teaching screenwriting at a New Jersey area college.

“The thing I miss most about ‘Action’ in the Afternoon’ is that it was live TV. You can’t find that anymore. It was exciting – like those old stories about dead bodies getting up while still on camera – well that did happen.

“THE FUNNIEST THING that happened in ‘Action happened to Frank Fisher, who was stage manager at the time. We had stagecoaches on the set, and one day, one got loose and took off into the parking lot and ran into Frank’s car. And when he called his insurance agent, he had to tell him his car had just been hit by a runaway stagecoach. Can you imagine?”

“Being an actor who has done so much packing and sleeping over the years, I look back on those days now and think how good it was to work (at home).” Indeed, in the years since, Sam has crisscrossed the country innumerable times doing national Broadway tours such as recent stints with “Mame” and “Showboat”.

“’ACTION IN the Afternoon” was my introduction to TV,” he said recalling doing his lines “with mikes in my armpits and crotch. I look back with pleasure on those days because of the great people I worked with, who remained lifelong friends.”

Barry Cassell, now living in Doylestown, was one of those friends. Now 63, the silver-voiced performer recalls his days as “Ace Bancroft. The resident heavy,” with a soft laugh, “I always wore a black hat,” Cassell said, referring to himself as “a slim, horseback-riding Sidney Greenstreet.”

Cassell had a distinctive place in the cast. “I was one of the very few who could ride a horse.” Indeed, he wound up giving lessons to the other cast members on what he remembers as “… very gentle animals – not ambitious at all.” His own horse – “a palomino named Sunny” – belonged to the Albert Taxins of Old Original Bookbinders. The horses were boarded at Fairmuont Stables.

But sometimes, the series scenes were frightening realistic. Like the time Ace was involved in a shoot-out. “My 3-year-old cried his heart out that I had been killed,” Cassell said.

NOW A FREE-LANCE actor who has worked on “Rocky III” and the recently shot film “The Tempest” in Atlantic City, Cassell can only wonder what would have happened “if technology (videotape) had caught up with us. Why. we’d of had a ball.

Chuck Wells never left the business since his days as a special effects man and make-up artist in “Action in the Afternoon.” He is still with WCAU, now as the station’s scenic supervisor. After nearly 30 years, he can recall vividly those days when he to make-up a tribe of Indians (“invariably blue-eyed”) or make sure some trap mines would explode on cue.

“People only remember the better days, but I remember both good and bad. I was somewhat of a Renaissance man on the set. I’d bounce around, doing a lot of things – simulating bullet holes, explosions – it was hectic, I’d walk out each day pooped.

“I can equate the experience almost to working on a stage show – there were no retakes. And there wasn’t any of the monotony of filming. You just rehearsed and did it.”

Jack Dolph was never really sure what kind of role he would be playing from week to week. Originally an assistant director (“really a stagehand”), Dolph was also involved with other programs at the station.

“I TURNED into an actor when I tripped over a cable and broke my leg,” he said. He soon was put to use before the camera, “and I died four times in the show.”

Bot everything went smoothly on the set Dolph recalled. “Somebody with the show had the bright idea to buy used warm-up coats from the Philadelphia Eagles to keep the actors warm during the winter months.” Dolph said. Occasionally, a desperado would forget to take off the coat on air “and the director would yell. Get No 52 off camera three.

“There was one scene where one of the actors was hanged. When it was done, everybody walked off the set and left him there – hanging.”

Dolph wound up as director of CBS Sports until 1969, when he became commissioner of the American Basketball Association. Since 1973, he has been involved in producing and packaging programs for TV, with an eye for cable.