Voices of the Spaghetti Western ~ “Kill or Be Killed” 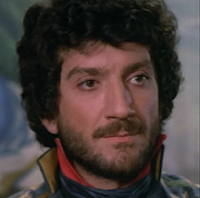 Gigi Proietti was born on November 2, 1940 in Rome, Italy. He was a director, musician, actor, comedian, voice dubber. Proietti studied law before embarking on a long and highly successful career in theater, film, TV and music in the early 1960s. Gigi was also known for his dubbing work, being the Italian voice of actors such as Roberto De Niro and Sean Connery. He also had a long association with Rome’s Globe Theater as artistic director of the summer Shakespearean festival. Proietti’s European western career included being the Italian voice of Robert Mark in “Kill or Die” (1966), Massimo Serato in “The Magnificent Texan”, Craig Hill in “15 Scaffolds for a Killer”, Gino Pernice in “The Hellbenders”, Benito Stefanelli in “Day of Anger” and Luigi Pistilli in “Death Rides a Horse” all in 1967. Gig Proietti died in Rome on his birthday November 2, 2020.