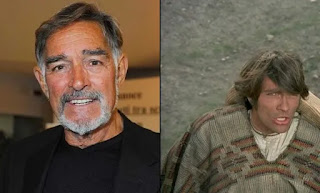 Spilimbergo - Third stage of Le Giornate della Luce, the festival that pays homage to the authors of photography in Italian cinema.

Tuesday 8 June at 8.30 pm at Cinema Miotto, I Magnifici 6 - Once upon a time there was the Italian western: an overview of the spaghetti westerns made through the voices and stories of those who, like Paolo Bianchini, made its history by directing cult films; like Fabio Testi, Liana Orfei and Luc Merenda who took part in it as unforgettable interpretations; such as Blasco Giurato who took care of the direction of photography and with Steve Della Casa and Oreste De Fornari, film historians and critics, who, continuing to nurture a visceral passion for the genre, will illustrate, together with the protagonists, the salient features of this production film that has marked the history of cinema nationally and internationally.

Some prefer to call them “Italian westerns”, in Japan they call them “Macaroni Westerns” and in Germany “Italowestern”. Among all the most used term is certainly “Spaghetti-Westerns”, coined in the first half of the sixties and in vogue until the second half of the seventies. A name to define a genre that became a symbol of a way of making cinema, of a period all over the world and even evoked certain soundtracks with unmistakable sounds. Initially the name 'spaghetti western' had a haughty meaning, given by foreign critics to the genre, to insinuate the inferiority of Italian films compared to American westerns.

In the Eighties, however, the prestige of the genre grew and today the term no longer expresses a derogatory sentiment, on the contrary it is synonymous with films with a well-defined and recognizable identity.

In the beginning it was the success of Sergio Leone's “A Fistful of Dollars” that charted the way, a western adaptation of “Yojimbo” (Akira Korusawa, 1961).

The interpretation of Clint Eastwood and GianMaria Volontè, the soundtrack of Ennio Morricone, the desert settings and the duels to the death became models to be pursued and created a real style with strong and recognizable connotations. Then came Sergio Corbucci, Mario Caiano, Giulio These, Duccio Tessari, Franco Giraldi, Enzo G. Castellari and others who fed the myth.

Following, the screening of Goodbye Ringo, by Pere Marzo.

Fifty years have passed since the golden age of spaghetti westerns. The era in which Italian and Spanish cowboys, Indians, artisans, technicians and artists lived in different places in Spain to create, in addition to a profitable economic industry, a real imaginary space.

Esplugas City, a western village built 10 kilometers from Barcelona, ​​was one of these places where an authentic cult was born, such as Duccio Tessari's Ringo saga, Giorgio Capitani's “The Ruthless Four” and Tinto Brass's “Yankee”. . “Goodbye Ringo” is a reflection on cinema and on a film industry that no longer exists. Through testimonies and reinterpretations of the places, memories of an era that has now disappeared are evoked.

The Days of Light festival is organized by the Cultural Association Il Circolo di Spilimbergo with the support of MiC, the Autonomous Region of Friuli Venezia Giulia, the City of Spilimbergo, the Friuli Foundation and Friulovest Banca