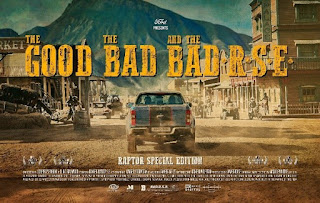 It seems that Ford is making sure just about every major sales region gets something new and interesting from the best-selling Ranger pickup series. The 2022 model year version just got revealed in Taiwan, the North American 2023 Ranger Raptor was caught hauling a massive trailer, and the Euro-spec Ranger Raptor RSE will be previewed later today on... Twitch.

t’s not the first time we see a major automaker reveal something interesting on the American video live streaming service focused on all things gaming. Still, this time around it’s interesting to note that we’re dealing with a model that will (probably) never arrive in the United States.

That’s the bummer hint we’re getting from the Blue Oval’s release on the “European exclusive preview of the new Ford Ranger Raptor Special Edition.” Aside from that, the Ranger Raptor RSE’s teaser is really worth a separate discussion because it comes with all sorts of traditionally American cues.

Those include the desolate Western background where a lot of Mad Max (mostly Fury Road) action takes place on bikes and quads. It clearly reminds us of cinemas, and the styling is very much a transparent ode to both Sergio Leone’s Spaghetti Western era (more specifically, the classic “The Good, The Bad, And The Ugly”) and Clint Eastwood’s take on the Old West.

The Ranger Raptor RSE itself isn’t very present in the short teaser. Still, Team Fordzilla promises more action will be available on the second episode of the TFZ:TV show (naturally hosted by members of the gaming team) that was streamed live Friday, May 21st, from 9:30 p.m. CET (2:30 p.m. EST).

By the way, the Twitch live-streamed monthly show usually includes both Ford-related news as well as gaming stuff, such as live sessions and prize-winning opportunities for the viewers.

The commercial was filmed at both Oasys/Mini Hollywood and Fort Bravo in Tabernas, Spain.