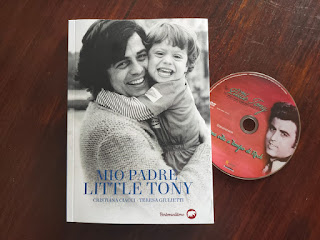 Cristiana Ciacci daughter of the Italian Elvis, with the collaboration of Teresa Giulietti, writer and ghostwriter from Parma, emotionally traces her life and the complex relationship between a daughter hungry for love and a too often distracted and absent father who would have wanted her to be more similar to him "less complex, lighter, a citizen of the world". Cristiana, without veils and with the sincerity that distinguishes her, tells of the broken dreams of a child eager for affection, years of hopes too often betrayed by a vain father, in love with music and his audience, and by an emancipated and enterprising mother she does not want to be crushed by the figure of the famous husband who crosses the world tucked into his stewardess uniform. Two unusual parents, absorbed in their own career and in a spasmodic pursuit of personal satisfaction. Two parallel lives that only meet every now and then.