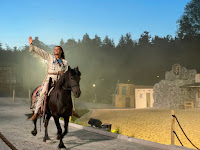 The Karl May Games Pullman City Bayern started yesterday evening in Eging am See: The premiere of the production “Winnetou and the Bear Hunter's Son” was only watched by 250 spectators in summery weather - not a sign of disinterest on the part of the audience, but a consequence a condition to meet the currently valid Corona regulations in Bavaria.

So the organizers had to refer numerous interested parties to later performances. A few days before the start of the season, against the background of the Corona restrictions, it was still completely unclear whether the premiere could take place as planned, but the Pullman City managing directors Ernst Grünberger and Claus Six finally managed to get the written approval from the authorities so that Winnetou could ride on schedule.

Cattle and bison that ran across the stage as well as numerous pyrotechnic special effects at Elspe level, which made the finale particularly effective, contributed to the high show value of the production.

Director Dietrich, whose staging shows his affection for the Segeberger Karl May Games - some scenes seem like a tribute to the North German Festival - succeeded again in the humorous part - this year with Max Hartl as Dicker Jemmy and Jochen Brand as Langer Davy - to be integrated into the plot in a beneficial way and not to be provided with extravaganza. Solid performances were also offered by “Old Shatterhand” Stefan Wimmer, who appeared in the Lex Barker memory outfit, and “Winnetou” Ivica Zdravkovic, whose sportiness and positive charisma impressed. Zdravkovic's Sauerland-colored tongue was much less of a disadvantage this year than before. Speaking of sound: Gordon Piedesack's extraordinary narrator voice came out of the loudspeakers again, which are part of a new sound system in Pullman City. The organizers have continued to invest in the festival area, which is also reflected in the expansion of the stage design and the lighting system.

You can see "light at the end of the Corona tunnel", it was said at the opening address by managing directors, local politicians and the Pullman City clergy. In the next few days the decision is to be made as to whether the permitted number of spectators can be increased from 250. After the successful premiere of “Winnetou and the Bear Hunter's Son”, which Claudia Jung, a member of the ensemble from the previous year, attended, the production is to be played up to and including September 12th. A total of 57 performances are planned. Info: www.pullmancity.de

For 2022, the production of "Winnetou I" is planned for the Karl May Games Pullman City Bayern.