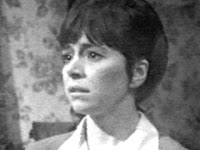 British actress Jackie Lane of the ‘Doctor Who’ television series died on June 23, 2021.  Born in Manchester, England on July 10, 1941, she played Dodo Chaplet, a companion to the First Doctor (William Hartnell) in the early days of the beloved sci-fi TV series. Lane starred in ‘Doctor Who’ alongside Hartnell in 1966, in the third series of the show. She was later portrayed by actress Sophie Holt in the BBC’s ‘An Adventure in Time and Space’, a docu-drama which portrayed the creation of Doctor Who. Prior to her role as Dodo, the actress appeared in various BBC TV and radio shows, including Anna Neagle’s radio production of Wonderful Things in 1958. Jackie appeared in four 1966 episodes of ‘Dr. Who’ revolving around the Tombstone, Arizona gunfight. Doctor Who: The ‘O,K, Corral’; ‘Doctor Who: Johnny Ringo’; ‘Doctor Who: Don’t Shoot the Pianist’ and Doctor Who: A Holliday for the Doctor.
Posted by Tom B. at 1:17 PM