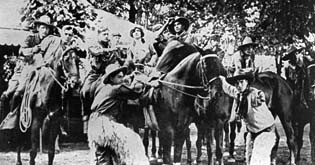 In a club, an adventurer pays his bill with a hundred-pound note hot off the press and takes a daring bet: He claims that he can get exactly this banknote back into his possession within 3 months. Without further ado, the serial number is noted and the banknote is marked. At the same time, the police uncovered a stash of counterfeit money containing several hundred pound notes with the same serial number. The detective Miss Nobody is taken care of with the solution to the case and begins her search. The journey takes them around the world; she ends up in a casino, a Chinese opium den, on the New York harbor and on a seedy farm, where she herself is in danger. The film adaptation of Jules Verne's novel takes place in some metropolises around the globe, for example Bombay, Nagasaki, Cairo or San Franciso. The first open-air buildings were constructed in Berlin to imitate the appearance of the cities as impressively as possible.