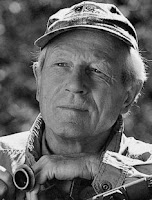 German cinematographer, cameraman, actor Heinz Hölscher died in Munich, Germany on May 7, 2021. He was 95. Born in Munich on October 9, 1925, Hölscher trained as a photographer and then worked in repro technology. In 1948 he became a camera assistant, and in 1954 served as chief cameraman for the first time. In the 1960s and 1970s in particular, Hölscher was one of the busiest cameramen in German entertainment cinema. He worked with directors such as Alfred Weidenmann, Alfred Vohrer, Harald Reinl and Franz Josef Gottlieb. For his camera work in the film version of Uncle Tom's Cabin (1965), he received the German Film Award. He later also worked behind the camera for several television series. Holsher worked on four Euro-westerns: "Rampage at Apache Wells" (1965) [cinematographer]; "The Halfbreed" (1966) [cinematographer]; "Hellhounds of Alaska" (1972) [cinematographer];, "Uncle Tom’s Cabin" (aka Cassy) (1975) (Quaker) [cinematographer].
Posted by Tom B. at 3:56 PM