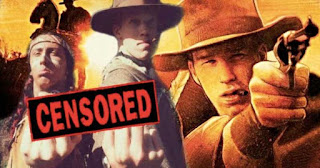 A very intense street fight is sweeping social media, as two men give each other the finger to infinity. Edgar Wright used the opportunity to jump in and remind everyone that his first feature film A Fistful of Fingers, which has gone unseen by many, is finally coming to Blu-ray in 2019. The street fight isn't really viral marketing, But Wright wishes it were. And now, it kind of is.

A few months ago, Edgar Wright announced that his first movie is finally coming to Blu-ray in 2019, after languishing for more than twenty years without a proper release. Many of us became familiar with Wright's work through his brilliant and beloved horror comedy Shaun of the Dead, which kicked off his Cornetto trilogy and big screen partnership with Simon Pegg and Nick Frost. However, in 1995, Wright made a scrappy little indie titled Fistful of Fingers that, up to this point, has never been commercially available. That's set to change next year.

The news was shared by Edgar Wright himself on Twitter. The filmmaker posted a video of two gentlemen flipping one another off repeatedly on the street in an exchange that doesn't really escalate, but refuses to end. Wright took the opportunity to reveal that Fistful of Fingers is indeed making its way to Blu-ray next year. Here's what he had to say about it.

"I want to believe that this is viral marketing for the 'Fistful Of Fingers' Blu Ray coming from Arrow Films Video next year."

Fistful of Fingers is a spoof of spaghetti westerns, specifically in reference to the Clint Eastwood classic, A Fistful of Dollars. The movie was made for a measly $15,000 budget, which is far below what even the most low-budget Hollywood flicks are made for. Fistful of Fingers is actually a remake of an even lower-budget version of the same movie Edgar Wright made while in school. Thanks to the notoriety it received locally, he was able to secure funding to shoot the remake of his own movie, which was released overseas at the Prince Charles Cinema in 1995.

The movie didn't make its debut in the United States until 20 years later at a midnight screening in Los Angeles. In the years since its initial release, Edgar Wright has become a very well-known and beloved filmmaker, behind hits such as Hot Fuzz and last year's Baby Driver. Still, despite that, Fistful of Fingers is something of a lost work of his, since it's never been released on DVD or Blu-ray. Though, it did make the rounds online back in 2013. Wright has been hinting on social media previously that the release is on the way, having revealed last year on Twitter that he recorded a commentary track.

Given how popular Edgar Wright has become, this is, in some ways, a piece of cinema history being unearthed. For now, there is no word on exactly when the Fistful of Fingers Blu-ray will be made available, but based on the tweet, we should expect it sometime in 2019 from Arrow Films. Meanwhile, Wright has been working on a documentary about the band Sparks, in addition to his plans to write and possibly direct a sequel to Baby Driver. Feel free to check out the video from Edgar Wright's Twitter account below. 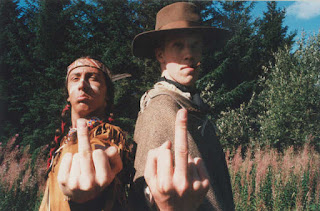