In this surreal subterranean world, Mendoza’s sinister laugh bounces off the walls as he starts to call out, “I’m over here, here, here . . . Joko, go back . . . you know you can’t kill me!” In response Joko replies: “You’re mad!” as he looks bewilderingly around him and the cavern walls start to spin. There is a clear feeling that these voices are inside Joko’s head. As he pursues the villain deeper into the labyrinth, Mendoza, with his face painted white, dressed in a cream-yellow-white suit and trailing a large cape behind him increasingly takes on the form of Joko’s double as he shouts in warning: “get out, get out!” The western setting has now been completely exchanged for a traditionally gothic symbolical underground labyrinth. Both the colour schemes and the traditional western soundtrack recall the cinematography and sounds of Roger Corman’s baroque Poe adaptations for AIP in the 1960s.

Rather than visualizing the underground world an abandoned gold mine, with railway carriages, old beams, and broken pick-axes, Vengeance has the underground passages lead to a central room that looks like a laboratory. Joko’s visage is no longer characterized by the typical macho cowboy gaze oozing his masculine heroic determinism to fight for the good of the community. Instead, his facial contortions show an increasing mental instability. When, after Mendoza’s repeated admonitions, he finally kills the villain, Mendoza’s final words are “you see, you lost, it’s a question of brains, Joko.” The hero’s vengeance is revealed to have served no purpose but to exorcise his own innate aggression, and in the end, Joko literally and willingly gives up his gun. By cutting loose its ties to the American West and focusing on the hero’s psychological struggle with his own violent drives, the movie becomes a gothic allegory of how masculine aggression under western ideological forces has taken monstrous proportions in the form of Mendoza.

In Django the Bastard (1969), director Sergio Garrone turned to the gothic trope of the ghost who returns to haunt and avenge a tyrannical authority figure, a classic gothic theme present in early gothic novels such as Horace Walpole’s The Castle of Otranto (1764), in Ambrose Bierce’s late-nineteenth-century ghost stories of resurrection and revenge, and even in such contemporary gothic masterpieces as John O’Barr’s graphic novel The Crow. In Garrone’s western, flashbacks reveal that Django and his fellow soldiers had been killed during the civil war because their superior officer had betrayed them into the hands of their enemies. This officer is now a rich and still sadistic landowner who hides himself behind a hoard of Mexican bandits. In the opening scene of the movie, the grotesque perspective that Leone devised to create an alternative point of view of the West is heightened by the use of extremely absurd camera angles, which rather than serving a comic purpose works to give the man with no name a more immediately threatening and supernatural appearance.
Absurd perspectives had been a staple narratological device in gothic fiction to create a sense of the supernatural. Novels such as James Hogg’s Confessions of a Justified Sinner (1824) used multiple accounts of the same story to confuse the reader about the status of the narrative as a tale of the supernatural or an account of madness. Many of Poe’s gothic tales are driven by first-person narrators whose diction and syntax makes the reader wonder whether the world that is represented is not merely a figment of the narrator’s imagination. 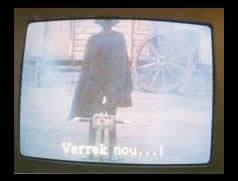 By introducing the stranger with a camera shot aimed directly at the top of his own head, the camera is unable to take in any of the surrounding setting or the rest of his body, giving the impression that the figure is gliding along the floor. The extreme close-up of his boots similarly cuts out any reference to the surroundings and reveals the continuity of the symbolic colour of his dress: unlike Clint Eastwood’s character, who wore shades of brown, and exactly like the original Django, Garonne’s Django’s black hat and boots reveal his symbolic function in the film as agent of destruction. Unlike the Hollywood westerns in which the colour black symbolized the villain, the informed gothic Eurowestern viewer will identify this destructive figure as a hero. When he is finally viewed in full in his surroundings, this figure stands at a distance and is still unrecognizable as a person. What is revealed now is his pointed black poncho, which gives his outline a formlessness that does not relate to the broad-shouldered, bow-legged posture of the traditional cowboy. By shooting this scene from behind the yellow wagon-wheel, the figure remains out of focus, a mysterious and haunting presence. By the end of the scene, when he has planted the cross that adorned his grave in the middle of the road, he announces himself to the town and the viewer not as a villain or a saviour but simply as the avenging angel of death.