Who Are Those Composers ~ Hans-Dieter Hosalla 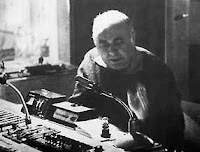 Hans-Dieter Hosalla was in Erfurt, Germany on December 8, 1919. He completed his apprenticeship in 1939 as a merchant's assistant. During the Second World War he was honored with several high honors and promoted on May 3 1945 to lieutenant in the reserve. After studying piano, conducting and composition in 1946/1947 at the Thuringian State Conservatory in Erfurt at the State Academy of Music in Weimar 1947/1948, he worked at the Landestheater Meiningen and then freelance for the cabaret, before moving to Berlin in 1951 and the newly founded technical school for artistic dance went. From 1953 to 1956 he was there as head of the music department and as a composer. During the 1956/57 season he moved to the Berliner Ensemble, where he worked until 1984 as a composer, and musical director. Hosalla started composing film scores in 1958, beginning with Gerhard Klein’s “Märchenfilm, Geschichte vom armen Hassan” (The Story of Poor Hassan). He continued to write film scores until the late seventies, at which time he retired from the movies, devoting his time, instead, to the Berliner Ensemble stage productions.

In addition to his many compositions of independent songs, he was represented on various phonograms and created various radio plays for music.

Hosalla was married first marriage to dancer, actress Brigitte Hosalla and then to Gisela Hosalla.  Hans-Dieter Hosalla died on August 18, 1995 in Berlin, Germany.