In Ford’s westerns, there was no doubt about the heroic status of the cavalry. In Garrone’s western, however, there is no doubt that the cavalry officer who betrayed Django is a representation of a selfish will to power, corruption, and tyranny. However, even though the Union army is shown up as a hotbed of corruption, vice, and selfish greed, the ghost of Django does not symbolise its moral counterpart. In fact, the representation of Django as an avenging ghost works to highlight, even more so than Leone’s westerns, the way in which machismo stands at the heart of moral hypocrisy. As a human cowboy, Django would have been struggling with the very immorality of his revenge because it would lower him to the status of those very villains who had wronged him. As a ghost, however, Django becomes a diabolical, equally self-serving force in the course of the film: his thirst for slow and bloody revenge becomes emblematic of the hyper-masculinity that stands at the root of the corrupt union officers who killed him in the first place.

As in Django the Bastard, in Jose Antonio Balanos’ Lucky Johnny: Born in America (1973), the horrors rather than the glories of the American civil war form the backdrop of the action. The protagonists here are again not Ford’s cavalry, but an old undertaker and his young ward, whose parents have been killed by bandits. They seem to wander through the war-torn West without any sense of direction in search of corpses to bury. This will allow the old man to collect the government premium with which to build a new cemetery to leave to Johnny as his patrimony. Whereas Leone’s Dollar Trilogy satirised the American obsession with gold and material wealth, Balanos’s Lucky Johnny utilizes the gothic trope of graveyard excesses to comment on the literal status in the American West of the otherwise abstract concept of “walking over dead bodies.” Whereas in Ford’s cavalry films the battles were ideological and in Leone’s film’s the Civil War was pictured as an opportunity for the trickster to make a profit, in Lucky Johnny the Civil War is reduced to the physical encounter between living and dead bodies. The grotesque universe of the Spaghetti western is distilled from all its comic particles when Johnny and his stepfather are stopped in their tracks by a mountain of corpses. The camera surveys this mountain of bodies by the dim light of a gas lamp, heightening the surreal nature of the viewing experience and transforming the terrifying scene into a horrific symbol for the outcome of the ideology of manifest destiny. The old man representing the naïveté of the western pioneer is ecstatic at their discovery and professes to Johnny that they are now rich and kisses one of the corpses in a gesture of thankfulness for the bounty he has received.

By its surreal and excessive piling of corpses and by presenting these corpses as the only viable currency of exchange, the film is not actually concerned with the American West but more with the American economic ideal that underscored western expansionism: a free-market economy in which every man fends for himself and his family, and in which he is increasingly pushed by commercial demands to become ruthless and unconcerned with moral values in order to survive.

Finally, Enzo G. Castellari’s developed Corbucci and Garrone’s use of gothic tropes — such as the immortal wanderer and the ghost — to create the most gothic of all Spaghetti westerns, Keoma (1975). The West in Keoma is initially represented using only shades of grey. This colour scheme had been utilized to great effect by Charles Dickens in the opening pages of his gothic mystery Bleak House (1851) to portray the immorality and hell-on-earth atmosphere of nineteenth-century London. In Keoma, too, the photographic tone sets the moral tone. By the end of the film, this grey western junk heap has transformed itself into a literal Hell on Earth in which the hero, Keoma, has the ambiguous honour of becoming a Christ-like symbol for human suffering as he is nailed to a gigantic wagon wheel while the demonic figures rave it up in the infernal saloon. 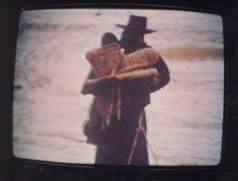 The gothic Spaghetti western was not a temporary blip on the popular culture radar of the 1960s and ’70s. As early as 1973, Clint Eastwood created his own American gothic western, High Plains Drifter (1973), followed later by another ghost story, Pale Rider (1985). Gothic Eurowesterns would also be greatly influential on the goth counterculture of the 1980s and ’90s. British goth rockers Fields of the Nephilim (1985-1992) would copy the look and sound of the gothic Eurowestern for their music and stage show. More recently, the Texas band Ghoultown has successfully blended gothic imagery with Spaghetti-western sounds, becoming key figures in the genre of Hellbilly music. Significantly, the gothic Eurowestern has become a structural as well as aesthetic influence on the world’s most prolific and successful contemporary author of horror fiction: Stephen King. His Dark Tower series was partly inspired by what King described as the “sense of magnificent dislocation” that characterises Leone’s The Good, the Bad, and the Ugly.11 One of the novel’s illustrations pictures the solitary wandering cowboy, standing on the horizon, a gun in each hand, overlooking a trail of dead bodies; he has just exterminated an entire town (King 66).

Note: This article was published in 2005 without illustrations and in a different format in the e-journal kiez21.org
Print Friendly, PDF & Email