Who Are Those Guys? ~ Adolfo Celi 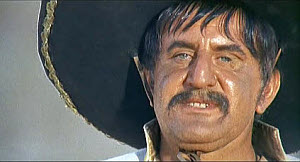 Adolfo Celi was born in Messina, Sicily, Italy on July 27, 1922. He became a film actor in post-World War II Italy. He left the Italian film industry when he emigrated to Brazil where he co-founded the Teatro Brasileiro de Comédia along with the Brazilian stage greats Paulo Autran and Tônia Carrero in São Paulo. He was successful as a stage actor in Argentina and Brazil. He directed three films in South America in the 1950s, including the Brazilian hit “Tico-Tico no Fubá” in 1952.

Celi began a new popular career when he played the villain in Philippe de Broca's “That Man from Rio”, selected by de Broca on location in Rio de Janeiro. The popularity of the film led him to be cast as camp commandant Battaglia opposite Frank Sinatra and Trevor Howard's Allied POWs in the 1965 Second World War escape drama “Von Ryan's Express”. This led him to his most well-known role as Largo in “Thunderball”. He is also known to international audiences as Ralph Valmont, one of the villains in the Mario Bava action thriller “Danger: Diabolik” and the celebrated Fernando Di Leo's poliziottesco film “Hired to Kill” (“La mala ordina”, 1972) as Don Vito Tressoldi.

Celi appeared as a protagonist in some Italian comedies including “Amici Miei” and “Brancaleone alle Crociate” and did some television work, notably in mini-series ‘Petrosino’ (1972), portraying the legendary Italian-American cop, and as the ruthless aristocrat, the Baron of Carini in another very popular mini-series, ‘La Baronessa di Carini’ (1975).

In addition to his native Italian, Celi was fluent in several languages, including English, Spanish, French, German and Portuguese. Despite his proficiency in English, his thick Sicilian accent meant that he was usually dubbed when he appeared in English language films; however, he was not dubbed in the 1981 BBC serial ‘The Borgias’, in which Celi played Rodrigo Borgia.

Celi was married three times and died of a heart attack in Siena in 1986. His daughter by Veronica Lazar, Alessandra Celi, is an actress and his son Leonardo Celi is a director.