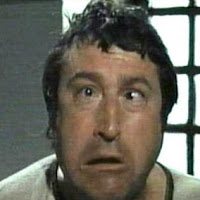 Italian comic actor Jimmy il Fenomeno died in Milan, Italy August 7, 2018. He was 86. Born Luigi Origene Soffrano in Lucera, Puglia, Italy he became known as Jimmy il Fenomeno and started his career in 1961 with an appearance in “Hercules and the Conquest of Atlantis”. He would go on to appear in over 150 films during the Golden Days of Italian cinema. His grimaces, dialect and the the tone of voice always made him stand out above his dialogue. Jimmy became a regular figure during the 1970s and 1980s in Italian sex comedies and was considered a lucky charm by producers and directors who insisted he had a small role if even just a cameo. Jimmy appeared in two Euro-westerns: “$10,000 for a Massacre” (1967) as a bartender and “The Longest Hunt” (1968) as a soldier in Major Doneghan's army.
Posted by Tom B. at 8:01 AM