The Old West is new again

The TV Western is enjoying something of a renaissance, with series such as 'Yellowstone,' 'Godless' and 'Westworld' making hay in big-sky country. 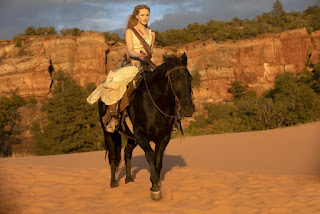 [Evan Rachel Wood in the Season 2 finale of "Westworld."]

In the new Paramount Network series “Yellowstone,” the Dutton family owns the largest contiguous ranch in the United States, a swath of Montana wild that’s comparable in size to Rhode Island.

They monitor their territory on horseback and in helicopters. They wear cowboy hats and business suits. They seek justice through court orders and by the pistols they keep holstered around their waists. In the pilot episode, they carve up a mountainside with sticks of dynamite to stop a developer from accessing a river coursing through their property. As John Dutton, the patriarch of the family, Kevin Costner embodies an American contradiction: You can take the frontiersman out of the Old West, but you can’t take the Old West out of the frontiersman.

Created by Taylor Sheridan, “Yellowstone” is the latest play on the Western from a screenwriter and director who specializes in 21st-century twists on the genre. His scripts for “Sicario,” “Hell or High Water” and “Wind River,” the latter of which he also directed, are all about lawmen and outlaws squaring off in an unsettled expanse, whether they’re cartels infiltrating the Mexican border, bank robbers peeling through West Texas or government agents seeking a killer on an Indian reservation. A Texas native who resides in Wyoming after a 15-year stay in Los Angeles, Sheridan is uniquely attuned to how Western values seep into present, especially in the prairies he’s called home. 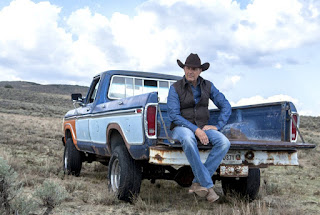 [Kevin Costner plays the patriarch of a Montana ranch family in “Yellowstone.”]

While the Western, traditional or otherwise, has been left for dead by Hollywood movie studios, neo-Westerns such as “Yellowstone” are finding a home on television, which can better accommodate a niche genre than risk-averse blockbusters. No matter whether these shows are set in the past, such as the Netflix limited series “Godless,” or the future, such as the HBO mind-bender “Westworld,” Western themes of identity, enterprise, power and violence are made newly relevant, shot through with the gun-toting brio that once enthralled audiences in the genre’s heyday.

“The overarching conflicts that Westerns have explored since the ’30s still exist today in those regions,” Sheridan said. “You still have massive land developers doing everything they can to buy out ranches and develop them. You still have the consequences of settlement in that region to Native Americans. You have issues with government and oversight, and an influx of people into an area that continually change it. You have a small population that’s trying very hard to resist change. All of those themes exist today, and they’re worthy of exploration.”

The divisions within the Dutton family might recall the prime-time soap opera of “Dallas,” but Sheridan wants “Yellowstone” – whose June 20 premiere earned a stellar 4.8 million viewers, counting DVR, in its first three days – to reflect a culture and a mind-set that city dwellers have trouble fathoming. He insists the show is apolitical, but it’s insightful about life outside the reach of government, where neighbors rely on each other to solve problems – and, occasionally, settle explosive disputes. For the Duttons, that means defending their territory and administering justice, because no one else is around to do it.

“There was a writer named Gretel Ehrlich who said that once you own land, you stop walking it and you start patrolling it,” Sheridan said. “There’s a real truth to that. You can see how it can change some people for the better and some for the worst. The question is, ‘Do I look at myself as the steward of (the land) or am I the king of it?’ ”

Although Westerns are known to operate with the moral simplicity of Black Hats and White Hats, the current wave of TV neo-Westerns works in shades of gray. Both Sheridan and “Godless” writer Scott Frank cite Clint Eastwood’s “Unforgiven” as a touchstone for their shows, which are short on unambiguous heroes. 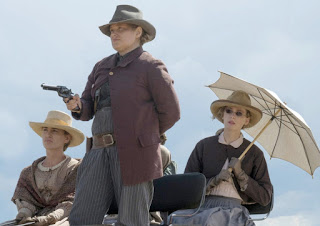 “Sometimes a person has to go back to the worst of themselves in order to do a good thing,” Frank said. and ‘Unforgiven’ is a classic example of that. Even the best of us are conflicted and tormented, and the Western is a natural vehicle for that.”

“Godless” was originally conceived as a feature film in 2004, but even a genre wizard of Frank’s caliber, with scripts such as “Get Shorty,” “Out of Sight” and “Minority Report” to his credit, couldn’t get it financed. Frank was told the Western “didn’t travel,” which means it doesn’t play well in the overseas market, and it wasn’t until his producer, Steven Soderbergh, started experimenting in television, with the HBO biopic “Beyond the Candelabra” and the Cinemax series “The Knick,” that he was encouraged to expand the concept into a 71/2-hour series for Netflix.

With elements plucked from standards such as “Rio Bravo” and “Once Upon a Time in the West,” “Godless” embraces the tropes of both a rollicking ’50s Western and the darkly philosophical anti-Westerns of the late ’60s and early ’70s, but with the feminist twist of an 1880s mining town run entirely by women widowed by a silver-mine collapse. After meeting so much resistance to his original movie script, Frank was surprised by how quickly the miniseries got the green light.

“What’s happening with Netflix and the other streaming services,” Frank said, “is that they’re swallowing up a lot of genres that have been forgotten by movies – not just the Western, but any genre for adults. The movies are largely real estate now for superheroes or really broad comedies and action extravaganzas.”

Jonathan Nolan, who co-created “Westworld” with his wife, Lisa Joy, puts it more bluntly. “The Western is a moribund genre,” he said. “It’s one of those things like we’re seeing now with comic book movies: They’ve come and they will go at some point, in terms of (their) all-conquering popularity. In the ’40s and ’50s, in a movie theater or (on) TV, you were as often as not going to find a Western.”

In reimagining Michael Crichton’s 1973 sci-fi shoot-’em-up about an Old West theme park populated by malfunctioning robot “hosts” – a precursor of sorts to Crichton’s “Jurassic Park” – Nolan and Joy engage in the dark fantasy of wealthy guests in a lawless playground of sex and violence. But their focus on the hosts and their uncannily humanlike qualities bring the show to a point in Season 2 where they’re trying to find their own stake in an unsettled and perilous world, like synthetic pioneers.

For Nolan, the show has been a natural opportunity to examine the Western from the inside out. Westerns “are filled with transgression and sin and betrayal, because that’s what we like to watch. It’s a common thread of all of our stories. And the question is why. Why is there so much commonality in the stories that we tell? What do they say about us? What do they say about the human condition, that we like these stories so much?”

Although some recent Western-themed films – such as “Hell or High Water” and this year’s “The Rider,” about a rodeo cowboy coping with a career-threatening injury – have opened to critical acclaim, television has the sprawl to give these questions some serious consideration, and the flexibility to revive a genre that hasn’t been commercially viable at the multiplexes for years. And its timelessness is borne out by shows that take place in the 1880s, the present day and some point in the distant future where android cowboys are indistinguishable from true grit.

The Western is dead. Long live the Western.
Posted by Tom B. at 6:01 AM